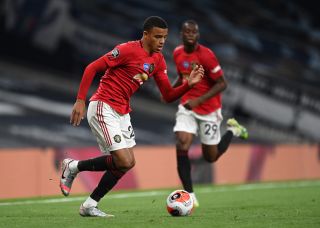 Ole Gunnar Solskjaer’s side take on the Blades in their first game back at Old Trafford since the Premier League’s return, and must secure victory to maintain hopes of a top four finish.

United’s draw against Tottenham on Friday has prompted some interesting selection dilemmas for Solskjaer, with impressive cameos from the substitutes bench and other underwhelming performances from starters.

One player that particularly shone from the bench was teenage sensation Mason Greenwood. While Paul Pogba earned all the headlines for changing the game, Greenwood was introduced at the same time as the Frenchman and caused as many problems for the Spurs defence.

Greenwood replaced Welshman Daniel James on the right-flank, who rather predictably struggled when coming up against a well organised Jose Mourinho side that sat deep and offered little space to exploit.

And Greenwood, who appears to have bulked up during the enforced break, made a profound impact as he took on a tiring Serge Aurier on the right-flank.

He is more unpredictable when in possession than James and was inches from scoring a last-minute winner with a right-footed effort that slid agonisingly past Hugo Lloris’ post.

Greenwood has scored 12 goals this term, compared to James’ five, and while his best position is not on the right-flank, he crucially offers Solskjaer a more potent goalscoring threat from the role.

It would make sense for him to start against Chris Wilder’s Sheffield United side, who are likely to set up with a low block at Old Trafford.

Re. #MUFC team selections, I see James, McTom, Fred, & Shaw as important tactical pieces in big game scenarios. When faced with a smaller team sitting in a low-block, Greenwood, Pogba (obv), Matic, & Williams are better. Problem is, nobody saw Spurs playing like minnows at home.

Mason Greenwood has 13 goals & 4 assists in 17 starts for #mufc — no teenager has contributed to more goals for a club in Europe's top 5 leagues.

It’s about time he becomes a regular starter. pic.twitter.com/jzu9QQoCb1

📋 #mufc slowly reaching the point with Greenwood, as we did with Rashford.

Club (rightly so) wants to utilise him pragmatically, but currently, he's the superior option in his position (RW) – Needs to start next game. pic.twitter.com/0lVQASsdbJ

Hope Ole knows Greenwood is now ahead of Dan James on the right.

Hope Ole knows Martial is not an automatic starter in a #MUFC team chasing trophies.

Hope Ole knows he has a big De Gea – Henderson decision to make.

I think it’s time we start playing Greenwood and Williams in our starting 11 from now on #MUFC pic.twitter.com/fuPlzHkD8F

Think it's a no brainer Pogba will start against Sheff United but think Greenwood should start also. Daniel James isn't cutting it for me. What's everyone else thinking about James?

Thoughts on draw with Spurs:

Paul Pogba, Nemanja Matic and Mason Greenwood all have to start next game. No doubt about it.