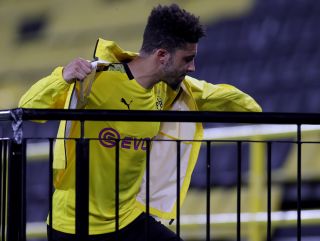 The Borussia Dortmund star is at the centre of this summer’s biggest transfer saga, despite the window not even being officially open yet.

As reported by the Independent, Sancho remains in United’s band of ‘high priority targets’ with manager Ole Gunnar Solskjaer desperate to bolster his attacking options as he looks to build a squad ready to challenge for the Premier League title.

But the coronavirus pandemic has complicated United’s pursuit of a player that could provide the perfect solution to the problem position on the right-wing.

United haven’t been immune to the financial hit clubs have taken during the pandemic and may be reluctant to spend large transfer fees on players this summer.

But Head of Football at SportBild Falk believes Dortmund would only be willing to let Sancho leave if they receive a transfer offer of over €100m.

Because of many requests about @Sanchooo10: his club @bvb sees still no reason to sell the player this summer. exception: a club offers a transfer fee over 100 million euros @ManUtd

Sancho has scored 17 goals and contributed a further 16 assists in the Bundesliga this season but hasn’t been a regular starter under Lucien Favre since the league returned last month.

We could be about to find out just how much United want to sign the England international who Solskjaer could build his forward line around alongside Anthony Martial and Marcus Rashford.