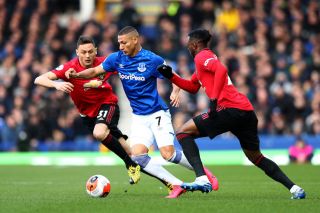 Everton forward Richarlison claims he turned down approaches from Manchester United and Barcelona in the January transfer window.

Richarlison has established himself as one of the most important players at Goodison Park since his arrival from Watford in 2018.

Ole Gunnar Solskjaer was desperately scouring the market for a forward in January, as he looked to replace the goals of the departed Romelu Lukaku.

United eventually secured an eleventh hour loan deal for Nigerian frontman Odion Ighalo, but Richarlison was one of a number of options reportedly considered.

However, the Brazilian international was not willing to leave his teammates stranded without one of their key goalscorers midway through their season.

“There were lots of offers during the season, from Barcelona, from Manchester (United),” he told Los Desimpedidos .

“But the club opted to keep me in the group and I didn’t want to leave in the middle of the season.

It’s clear to see why United registered an interest in the 23-year-old given his versatility and promise.

Richarlison has linked up well with Dominic Calvert-Lewin to form a promising strike force since Carlo Ancelotti took over the reigns from Marco Silva on Merseyside.

He has scored 10 Premier League goals so far this term, and will be hoping to add to that tally as Everton look to thwart Liverpool and delay their inevitable title win during the Merseyside derby on Sunday evening.