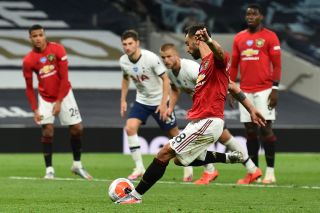 Dutch winger Steven Bergwijn opened the scoring with an individual goal as far as Spurs played are concerned. Most of the work that contributed to the game’s first goal came from Bergwijn, Harry Maguire and David de Gea.

However, Paul Pogba’s introduction in the second half helped turn the match for United.

Pogba won a penalty after contact from Eric Dier in the box. Only for Bruno Fernandes to step up and score from the spot.

Manager Ole Gunnar Solskjaer is spoilt for options when it comes to penalty takers.

Fernandes has been prolific from the spot since arriving at the club — and we’ve also got Pogba and Marcus Rashford.

In fact, after the match on Friday night Fernandes used his post-match interview to outline had Rashford been on the pitch (not substituted) then he’d probably have taken the penalty.

Fernandes told Sky Sports, as seen in the video below: “We have good good penalty takers. We have a lot of players who can take a penalty.

“I trust in Rashy like everyone has trust in me.”

🗣 "I like the pressure, with a crowd it will be better"

Bruno Fernandes on playing with no crowd pic.twitter.com/XuJa7b6itz

Pogba must be third in the penalty taking pecking order!