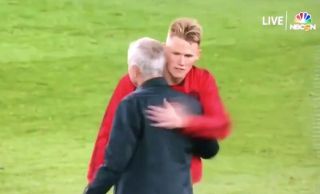 It wasn’t a bad point to secure away from home — and the result means Ole Gunnar Solskjaer has taken four points from José Mourinho’s Tottenham side this season.

After the game ended as a draw, players bumped fists instead of shaking hands — with the exception of McTominay.

While we are sure other players ran over to Mourinho (he’s an ex-boss for many of them), McTominay is a player who remained close to the Portuguese international when the tide was changing at Old Trafford during his reign as manager.

Footage below courtesy of NBC Sports:

McTominay shaking hands with Mourinho after the game. Mourinho gave him his debut at United. #MUFC #SpursVManUtd pic.twitter.com/bto545hQLV

McTominay emerged from United’s academy under Mourinho. A year ago, he gave an exclusive interview to The Times, saying: “Jose was amazing for me. Though when I first came in Jose gave me a serious, serious b********g.

“I was arguing with one of the first team lads in training and he said ‘hey, kid, when you come into the first team, the other players — they have to like you.’

“‘You’re not a superstar’, he said and I drove back to digs thinking ‘have I just ruined it for myself? I couldn’t believe it.

“I thought ‘I hope he knows I don’t think I’m a star, I’m the polar opposite.’ He probably just wanted to see what I was made of, what sort of lad he had on his hands.

The Scotland international played 89 minutes of football last night and will hope his performance improves quickly.

Under Solskjaer, McTominay has grown into an influential first-team player and United miss his presence whenever he’s out injured.

READ MORE: Opinion: Questions need to be asked of De Gea when United have an outstanding keeper out on loan