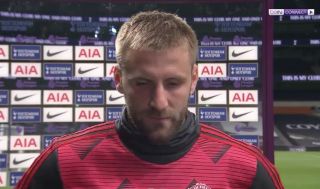 One point is not enough says a disappointed Luke Shaw after Manchester United came back to force a 1-1 draw away to Tottenham Hotspur.

The England international is not wrong and I actually feel we should have won the game last night, if it wasn’t for some shoddy defending in the first-half.

Shaw himself struggled against Serge Aurier down his side in the first-half but grew into the game. He made a key tackle on Erik Lamela which kept the game at 1-0 and he set up a chance for Anthony Martial.

Luke Shaw spoke to beIN SPORTS after the game, saying: “Disappointing result to be honest. I think we controlled the game and we created more chances. They got a lucky goal but David [de Gea] made a brilliant save from Son’s header, so he kept us in it. We just got to keep fighting and take the positives from today. We’ve got another massive game on Wednesday and this time we need to win.”

That’s a warning for the troops and there can be no excuses if we don’t beat the Blades on Wednesday.

I could see glimpses of brilliance last night and we looked a bit fitter than Spurs.

But Shaw is right, a point isn’t enough.