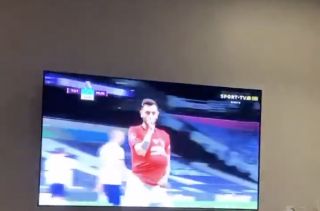 Manchester United and Tottenham Hotspur squared off tonight in a crucial tie which saw Bruno Fernandes win yet another man-of-the-match award.

Despite being the most exciting Premier League game since the league’s resumption, the points were equally shared with a 1-1 final score.

Dutch attacker Steven Bergwijn opened the scoring in the first-half for Jose Mourinho’s side.

However, Tottenham’s lead was to be nullified late on in the game by a well-converted Bruno Fernandes penalty which came as a result of Eric Dier bringing down Paul Pogba in the box.

The Portuguese creative midfielder’s wife was quick to take to her social media to share an emotional clip of her and their daughter cheering on their man’s goal.