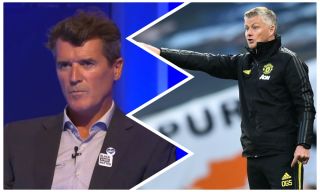 Manchester United manager Ole Gunnar Solskjaer doubted Roy Keane’s opinion that David de Gea is overrated and that he would have saved Steven Bergwijn’s goal in the 1-1 draw at Tottenham last night.

The former United skipper did not hold back in his assessment of the Spanish goalkeeper’s attempt to stop Bergwijn’s first-half strike.

The Dutch winger burst through the United defence and caught Harry Maguire wrong footed. Once he broke free near the box he shot straight at De Gea, but it went in.

United had to fight hard to get an equaliser which came in a 81st-minute penalty from Bruno Fernandes to pick up a deserved point.

Keane went on a rant at half-time and said De Gea should not be allowed on the bus after the game because he should have saved Bergwijn’s effort, even though the Spaniard later made a good save from Son Heung-min.

The game would have been over if that went in!

“I think we’re disappointed they scored the first time they had a chance,” Solskjaer said, as quoted by GOAL. “The boy hit it really well. The ball moves.

“Roy was a fantastic midfielder, a good friend of mine, but I’m not sure he would have stopped it.

“David is disappointed with it but the ball was moving. We reacted well, he had a good save five minutes after.

“We had a bad spell for 10 minutes and they looked like they could get the second so when David saved the second one at least we were in the game at half-time.”

Keane was less angry at full-time. Maybe because United came from behind and secured a point, but he reacted to these comments from Solskjaer rather smartly, making the United manager know that a ball will move after it’s kicked…

The Irishman is box office and has the licence to say what he likes in the Sky Sports studio. It’s a different story for Solskjaer who is Manchester United manager, and he was never going to throw any of his players under the bus last night!