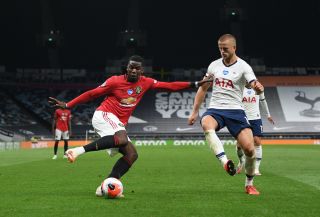 Pogba, 27, made his long-awaited comeback from injury last night against Tottenham Hotspur. The Frenchman was subbed on with half an hour to go by manager Ole Gunner Solskjaer.

The positive influence the centre-midfielder had on the game was a reminder to all his critics that the World Cup-winner was still very much in the ‘best in the world’ conversation.

Pogba’s stand-out moments in his cameo included an utterly superb 40-yard cross-field pass and a stunning run into the box which led to a United penalty.

The midfielder’s impact has been subject to much praise from football followers, however, BT Sport pundit and United legend Rio Ferdinand has gone on record to issue Pogba with a challenge to become more consistent.

The popular pundit has made it clear that he would like to see Pogba demonstrate last night’s performance on a more regular basis.

According to Manchester Evening News, speaking to BT Sport, Ferdinand said “Before the game, Ole Gunnar Solskjaer would have intended to go and win the game.

“But the way the game panned out, Spurs on the counter always looked quite dangerous.

“It was poor defending all-round from Manchester United for the goal.

“I think the cameo from Paul Pogba was something to delight all the fans, especially Manchester United fans.

“You got a really good glimpse of what this guy is about.”

Speaking about Pogba’s involvement in the United penalty and his stunning passing range, Ferdinand said “Dier was mesmerised for the penalty, he was taken apart and fooled. That half-volley to Marcus Rashford on his toe was beautiful.”

READ MORE: Opinion: Questions need to be asked of De Gea when United have an outstanding keeper out on loan