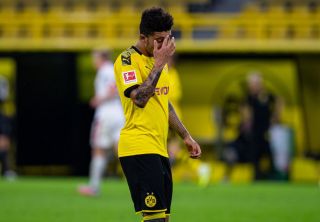 Manchester United have been long linked with a move for Borussia Dortmund sensation Jadon Sancho and we are led to believe he is Ole Gunnar Solskjaer’s prime target this summer.

The England international was benched today for Borussia Dortmund’s afternoon clash with RB Leipzig as Lucien Favre’s side looked to secure second place. They won 2-0 thanks to an Erling Haaland brace.

Bayern Munich won the Bundesliga title in midweek with a win at Werder Bremen.

However, Sancho came on with 12 minutes left of normal time but his absence from the starting eleven prompted more Manchester United transfer speculation.

According to German journalist Heiko Wasser, the call was made on the basis that Sancho’s head is turned, in the direction of Old Trafford.

When translated directly into English via Twitter, the above reads: “That @Sanchooo10 sitting on the bench at first is completely ok, he is already with his head @ManUtd. However, mMn [sic] would have been even more urgent @JulianBrandt and @axelwitsel28 a break is necessary, unfortunately there are no alternatives in the squad. @BVB #RBLBVB”

Every club has been hit hard by the impact of the COVID-19 pandemic, but United will still try to close on the gap they have to reach 1st place in the Premier League, currently occupied by Liverpool who need just two wins to seal the title.

Sancho is a star in the making and could help us bridge that gap!