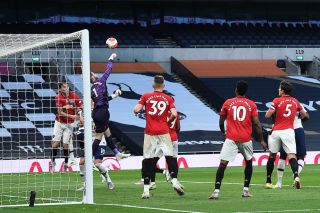 Dean Henderson must sense that his time is coming. David de Gea didn’t exactly coat himself in glory towards the end of last season and he’s not done his high standards any justice since then.

Without going over the top and suggesting he should have been left in London last night, De Gea has been at fault for too many errors and it doesn’t surprise me that pundits are talking about Henderson being No.1 next season.

But is this knee-jerk commentary? Perhaps – we are one game into the 2019-20 season resumption after a three month suspension period.

But when you have one of the most outstanding goalkeepers in the Premier League out on loan, the question has to be asked.

Roy Keane launched a scathing attack on De Gea last night after Steven Bergwijn’s goal. Manager Solskjaer was reluctant to throw his goalkeeper or captain, Harry Maguire, under the bus for their errors that led to the goal. Instead he put the Spaniard’s howler down to the movement of the ball.

Then Keane made Solskjaer await that balls move when kicked.

It wasn’t too long ago that a vast majority of United’s support, including myself, advocated the club to ‘pay him whatever he wants,’ and at that point his form was far from adequate.

A problem we have with so many players is that they are on wages they won’t get elsewhere. Look at Alexis Sanchez… It will take a miracle for someone to come in and take him off our hands this summer. A miracle!

Please take a few moments to vote on our poll below:

Who do you want as No.1 next season?