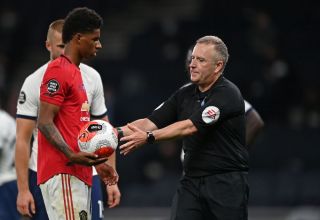 Manchester United are on course to break the Premier League record for most awarded penalties in a single campaign after last night’s draw away to Tottenham Hotspur.

The record for most awarded penalties in a domestic Premier League season currently stands at 13 penalties, a record which is shared by both Crystal Palace (2004/05) and Leicester City (2015/16).

United now have eight league games remaining in their 2019/20 campaign and are currently two penalties shy of the record.

The Red’s penalty last night which was won by the superb Paul Pogba saw his side’s current tally of awarded penalties rise to 11.

We’re not sure if a ‘most awarded penalties in a single campaign’ is a record United fans will want to be associated with, but pockets of fans have been quick to defend the legitimacy of the seemingly favourable decisions.

Here’s ALL of United’s penalties given this season, still think we pay off the refs? 😂pic.twitter.com/26hvGG2UgT

READ MORE: Odion Ighalo can’t hide how happy he is with life at Manchester United