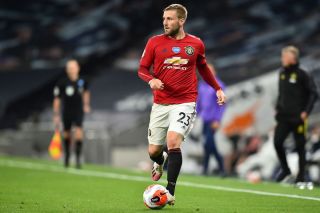 Manchester United left-back Luke Shaw has paid tribute to the squad’s post-break fitness levels after seeing his side comeback to salvage a point in last night’s Premier League game away to Tottenham Hotspur.

Shaw, 24, managed to see out the full 90-minutes in what was United’s first competitive game back since the coronavirus pandemic brought the football season to a halt.

The English defender believes that the squad’s strong match conditioning meant the Reds had the edge over fellow top-six side Spurs.

Speaking to ManUtd.com, Shaw said: “We never give up and we kept going.

“We felt fit, we felt stronger than them and we felt like they were struggling at times. We kept going and got the penalty,” he added.

Shaw admitted that the unprecedented break in the season came at a less than ideal time for the squad: “I feel great, The break came at a difficult time as we were flying, but everyone’s worked really hard and kept in great shape over the period we have off. We’ve come back flying.

“We need to push on from here. The [unbeaten] run keeps going but we need to take away the draws and get the wins instead because that’s the most important thing.”

Shaw, like team-mate Paul Pogba had a decent game overall as fans were treated to glimpses of what the Englishman can offer going forward.

The full-back went onto praise Pogba’s influence saying: “I told him [Pogba] afterwards how much of a difference he made.

“He didn’t play for that long but obviously it’s great to have him and Rashy [Marcus Rashford] back in the side.

“They are very important players and maybe we can see Paul [Pogba] from the start on Wednesday.”

Manchester United are back in Premier League action on Wednesday when they will take-on fellow European hopefuls Sheffield United.

Shaw is likely to keep his place at left-back, though it shouldn’t be long before we see the emerging Brandon Williams again.