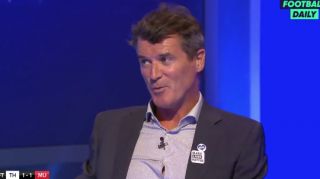 The Dutch winger caught Maguire flat footed and turned him inside out before driving his effort past De Gea, who should have done more between the posts.

Keane, clearly angry with the Red’s first-half display then began unravelling De Gea’s contribution to the Spurs opener: “I am sick to death of this goalkeeper,” he said, adding: “I would be fighting him at half-time. There is no getting away from that. I would be swinging punches.

“This is a standard save for an established international goalkeeper. I am flabbergasted.

“Get a taxi back to Manchester. […] Maguire, De Gea, you should hang your heads in shame.”

However, with United finding an equaliser 10 minutes from full-time, Patrice Evra took the opportunity to ask whether Solskjaer’s men deserved to get the bus back to Manchester.

Keane gave in – but would only allow them to sit at the back of the bus! 🤣

Watch the clip below (footage courtesy of Sky Sports):

Even Roy Keane can’t get the hump with Patrice Evra 😂😂 pic.twitter.com/1OKdUUl3Fb