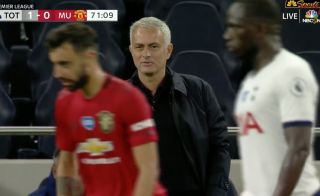 José Mourinho up to his old tricks!

It’s difficult to make out what Tottenham Hotspur boss José Mourinho says to Bruno Fernandes from the touchline, but the Special One thought it was funny.

Mourinho, who managed Manchester United before Ole Gunnar Solskjaer, exchanged some words with his fellow countryman.

Fernandes didn’t seem to take any notice of what was said — presumably ignoring a dig from Mourinho who we can only imagine was trying to get into the player’s head.

It was Fernandes who scored the equaliser for United after Paul Pogba earned the Red Devils a penalty with just over 10 minutes to go.

Watch below to see Mourinho chuckle to himself after passing a comment to Fernandes (video courtesy of NBC):

It’s a big game for both teams but Spurs will be right back in the mix for top four if they grab a late winner.

Hopefully it’s us getting a late goal!