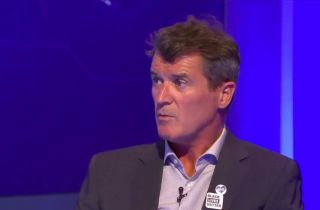 Manchester United great Roy Keane was not impressed with the attitude of Aston Villa captain Jack Grealish as the Premier League returned on Wednesday.

Villa played out a 0-0 home draw against Sheffield United, but were fortunate not to lose after a calamitous Goal-line decision system error where a goal was not rewarded despite the fact the ball was clearly over the line.

A win would have seriously boosted Dean Smith’s side’s chances of survival this term, with Villa remaining in 19th, one point from safety.

Keane was concerned about the intensity that was on show between the two sides, and picked out Grealish for laughing and perhaps not taking the game seriously enough.

Grealish, of course, has been heavily linked with a move to United this summer as Ole Gunnar Solskjaer looks to bolster his creative options.

As reported by the Manchester Evening News, United have already held preliminary talks over a transfer and retain an interest in the 24-year-old.

United take on Jose Mourinho’s Tottenham on Friday night in a crucial game for the club’s top four aspirations.

As always, Keane did not hold back in his assessment of Grealish. Listen to his thoughts below, courtesy of Sky Sports:

🗣"Everytime I looked a Grealish he was laughing, listen do you realise what's at stake here"

Roy Keane about players returning from the break in the bottom half of the table pic.twitter.com/PIFROiu0MY