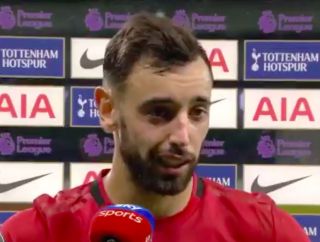 Bruno Fernandes and Paul Pogba showed glimpses of a lethal partnership in Manchester United’s 1-1 draw against Tottenham on their Premier League return.

Fernandes converted the penalty brilliantly won by Pogba, who changed the game after coming off the bench with half an hour to go as the Reds salvaged a point.

Ole Gunnar Solskjaer opted not to start the Frenchman, instead selecting a more solid looking midfield double pivot of Fred and Scott McTominay.

And the key question United fans will be asking themselves after the game is why Pogba was not on the pitch sooner.

We were given a reminder of Pogba’s exceptional ability during his 34-minute cameo tonight, which has surely made him a certain starter against Sheffield United at Old Trafford in five days time.

Fernandes revealed after the game that he and Pogba have been working hard to build a connection in training, and enjoyed finally teaming up with him in a competitive match.

Listen to Fernandes’ full-time thoughts below, courtesy of Sky Sports:

'Paul thinks the same as me, we're happy.'