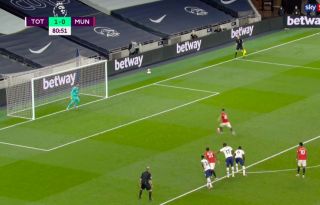 Bruno Fernandes’ penalty has drawn Manchester United level against Tottenham Hotspur in their first Premier League game back after the enforced break.

The Portuguese playmaker wrong-footed Spurs goalkeeper Hugo Lloris to fire into the bottom left corner and keep up his 100% record from the spot for United.

The penalty came after excellent work from Paul Pogba, who forced a penalty from Eric Dier in the box.

It was a case of attack v defence before United finally equalised and Ole Gunnar Solskjaer will hope his side can push on for a winner in the final minutes.

Pogba’s impact on proceedings has been hugely impressive and begs the question whether the should have started this evening.

See the penalty below, courtesy of Sky Sports: