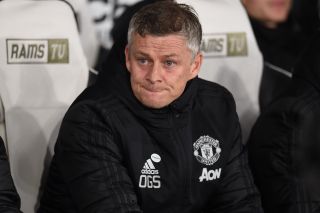 Ole Gunnar Solskjaer is no different to any of us when it comes to tonight’s game against Tottenham Hotspur.

The Norwegian cannot wait for his side to take to the pitch again for a competitive fixture. Tonight our Premier League campaign resumes at 20:15 BST with a huge match in the race for top four.

In an exclusive interview with the club’s official website, Solskjaer claims his side is fully prepared and eager to tackle what could be a hectic season finale, not forgetting that Manchester United also have the FA Cup and Europa League to play for.

“I think we’ve got to try to be as ready as we can,” Solskjaer said ahead of United’s trip to Spurs. “Of course, you don’t really now until you get into the competitive games. We’ve prepared as well as we can. We’ve trained hard, and we’ve had a couple of 11-a-sides between ourselves. We had a friendly game against West Brom and the players look like they’ve looked after themselves in the lockdown as well. We’re as ready as we can be.”

However, there’s no denying that our preparation has been slightly hit by some injuries. But it’s Axel Tuanzebe and Phil Jones who are often out with niggles.

“Yeah, we’ve got a couple of injuries. Axel [Tuanzebe] will probably be missing and Phil Jones will be missing. Apart from that, I would say everyone else is available for selection. Pre-season, you want to give everyone a chance, everyone the same opportunity to stake a claim for the team. Everyone will play a part. We’ve got plenty of games, hopefully we’ve got a few cup games, plus the league games and the Europa League, so we’ll be going until August some time.”

As of tonight, Solskjaer is permitted to make up to five substitutions to help the players deal with having so many fixtures in a short period of time. The manager is in total favour of this addition to the game as it helps look after the players in tough circumstances.

“I think it’s good that we look after the players in these circumstances, not just for this first game, 90 minutes, or the second, or this short period of time. But we’ve got to remember all the games coming up as well. Next season will be starting soon — we’re not going to have too much time off. In a transition period, I think it’s OK. I still like the three subs as normal because sometimes the team rhythm can go if you change half the team.”

Solskjaer praised some of Spurs players too, saying: “Of course Tottenham are a top team, Champions League finalists last season. Now we know Harry Kane, [Heung-min] Son and [Moussa] Sissoko, they’re all back so we’re going to play against a top team, as you say. The first game, things always happen in the first round, second round and after a pre-season. Now of course, it’s towards the end of the season but it’s been a long break and you can see last night even [in the Aston Villa v Sheffield United and Manchester City v Arsenal games], mistakes happen that normally don’t. To get into the rhythm is important and we’ve got a tough start, but we’re looking forward to it.”

Check out our match preview and predicted line-up.