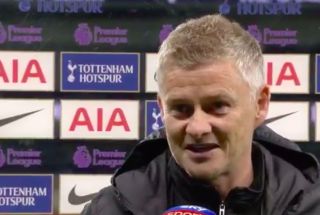 Manchester United manager Ole Gunnar Solskjaer says individual errors are ‘to be expected’ after his side’s 1-1 draw against Tottenham on their Premier League return.

Tottenham took the lead through Dutch forward Steven Bergwijn midway through the first-half and the role of several United players in the goal must come into question.

Bergwijn then glided past captain Harry Maguire before firing a shot past David De Gea that undoubtedly should have been saved.

Despite being struck fiercely, the shot was close enough for a player of De Gea’s class to deal with it comfortably.

But, unsurprisingly, Solskjaer refused to lay into any of his United players, just conceding that it was a disappointing goal to give away.

Bruno Fernandes salavate a 1-1 draw from the penalty spot late on against a resolute and organised Spurs side.

Listen to Solskjaer’s post-match thoughts below, courtesy of Sky Sports:

"To be fair to Bergwijn it was a very good strike and the ball was moving all over the place."

Ole Gunnar Solskjaer says individual errors are 'to be expected' even though he was disappointed with Spurs' opener in tonight's clash.