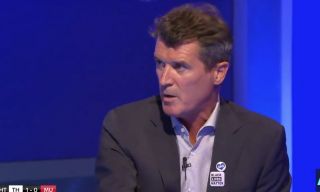 The Irishman has used half-time to go to town on the United defence, singling out keeper De Gea and captain Harry Maguire.

The Irishman said: “I am shocked […] I am fuming here watching this game of football.”

The criticism of the United skipper didn’t stop there as Keane went onto say: “I am staggered at Maguire. Staggered at an international just gets done like this.”

Keane, clearly angry with the Red’s first-half display then began unravelling De Gea’s contribution to the Spurs opener: “I am sick to death of this goalkeeper,” he said, adding: “I would be fighting him at half-time. There is no getting away from that. I would be swinging punches.

“This is a standard save for an established international goalkeeper. I am flabbergasted.

“Get a taxi back to Manchester. […] Maguire, De Gea, you should hang your heads in shame.”

Watch his rant below, courtesy of Sky Sports:

“Maguire. De Gea. I wouldn’t even let them on the bus after the match. Get a taxi back to Manchester!” 😂

Safe to say that Roy Keane wasn’t impressed with some of those Man Utd performances in the first half 😱 pic.twitter.com/Qvf8035d7Q