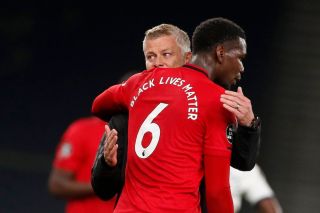 Manchester United faced a difficult return to Premier League football, ending with a 1-1 draw with Tottenham Hotspur despite dominating many spells of the match.

Ole Gunnar Solskjaer’s men looked rusty and lethargic early in the match but grew into proceedings, eventually dominating large spells of the match and being unlucky to overturn their early deficit.

Credit must be given to Jose Mourinho, who didn’t play into United’s counter-attacking hands and used his extensive knowledge of his former club to exploit specific players in the side. That is reflected in the player ratings, as many players played well but were stifled enough to prevent Solskjaer from taking all three points.

Making big errors is seemingly becoming a trend for de Gea, whose performances continue to disgruntle United fans. While I don’t believe the Spain international deserves the primary blame for Steven Bergwijn’s excellent strike, he continues to decline from the world class standard that he established under Louis van Gaal and Jose Mourinho.

Wan-Bissaka was solid defensively as always, shutting down the flank and forcing Heung-Min Son to cut inside and find space elsewhere. He wasn’t at his usual standard in possession and seemed to struggle to take on players the way he did during the break. Expect Wan-Bissaka to improve as more matches are played.

Lindelof was in the better half of United’s back four tonight, maintaining United’s tempo during possession spells and seldom getting found out off-the-ball. He has been excellent against sides in the top half this season overall, but his injury late in the match looked worrying.

For the first time in quite a while (and not just because of COVID-19), Maguire was found out today. He misjudged Bergwijn’s acceleration and allowed the Dutchman to run into space, missing his challenge and ultimately leading to a conceded goal. The United captain was beginning to place himself amongst the world’s elite defenders before the break, but now has a lot to prove in upcoming weeks.

Shaw’s performance was very much a mixed bag, with some brilliant moments overshadowed by occasionally looking out of his depth against the threat of Bergwijn. Overall, he will have to do better to resist the competition of Brandon Williams.

Despite playing in a very compact midfield, McTominay was able to get a real grip of the game and find time on the ball, asserting himself physically and always impressing with his underrated technical ability. The academy graduate will likely anchor the majority of United’s remaining matches.

Fred proved that he definitely has the ability he was showing before lockdown, but he also looked redundant for large spells of the match. The combative midfielder seems reluctant alongside McTominay, and unfortunately, the Scotsman is both younger and better suited to the strengths and weaknesses of the other midfielders in this side.

Fernandes struggled to assert himself at times but still ended up with a great creative performance and a goal from the penalty spot. The midfielder isn’t as influential in the middle third as the likes of McTominay and Paul Pogba, but he more than makes up for it by running the show in the final third- getting him the ball will be crucial to United’s Top 4 hopes.

James tends to struggle against deep blocks, making his determined but flat performance predictable but not excusable. While he primarily is a left-winger, he isn’t good enough to be a starter in that role, and will need to develop the dimensionality of his game to be an asset to United long-term.

Rashford did excellently to create a half-volleyed chance in the first half that was well saved by Hugo Lloris, but overall, he failed to show the sharpness that made him so brilliant before his injury. Expect a slow return to full speed and some wonderful goals before the end of the season.

Like Rashford, Martial was denied by Lloris from an excellent chance in the second half, but otherwise was not involved in the game. Both Martial and Rashford need to get into form and edge towards personal tallies of 20 Premier League goals if United are to reach the Top 4.

Finally returning from injury as a substitute, Pogba was the best player on the pitch. Solskjaer’s decision to start Fred made sense given the Brazilian’s previous form and fitness, but Pogba needs to be playing in midfield long term.

A rating of 5 makes Greenwood the best performer in United’s attack, but while he had excellent moments, he failed to make his appearance known on the pitch. Greenwood has to start as United look to break another deep block against Sheffield.

Matic came in to shore up the defence and did exactly that. He offers a wider range of passing than Fred and McTominay from deep in midfield, but he ultimately remains too ponderous to fulfill Solskjaer’s demands in every single match.

Like Greenwood, Ighalo struggled to get involved in the messy late stages of the game, playing his part whenever called upon. His hold-up play is excellent but even the most optimistic of supporters wouldn’t predict him to continue the goal record he had before the break.

Bailly came on late in the match to replace the exhausted McTominay, and given Lindelof’s knock, will likely start next week against Sheffield United.