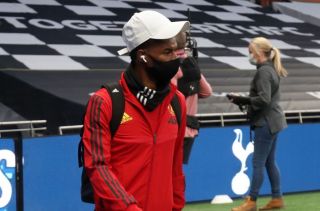 The Premier League is back underway and all clubs are making sure to take caution on their travels to football stadiums.

Manchester United are in London where they resume their Premier League campaign against Tottenham Hotspur who are also in the race for top four.

Anyhow, the players have arrived and can be seen in the pictures below wearing face masks, along with manager Ole Gunnar Solskjaer.

Rather be safe than sorry!

United’s team news is out and Marcus Rashford starts.

More updates on the blog throughout the game, or alternative stay tuned on Twitter (@StrettyNews).

READ MORE: Rival Talk: Tottenham blogger on Mourinho, Kane to United reports and wanting Rashford to score if they lose