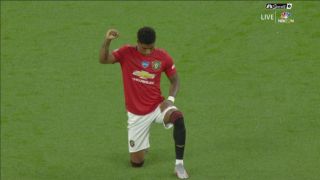 Football returned to the UK after months of stoppage due to the coronavirus pandemic.

Tonight Tottenham Hotspur host Manchester United and players of both teams kneeled and wore special Black Lives Matters (BLM) shirts. On top of that, all players had the words “Black Lives Matter,” replacing their names on the back of their shirts.

It was announced on Friday last week that the Premier League would be joining the international protest campaign against police brutality, sparked by the murder of George Floyd in Minneapolis.

This is another example of footballers rising to the occasion and standing for what is right.

In fact, Marcus Rashford is a prime example for all he’s done for the vulnerable people in the UK who rely on food banks. It was his influence that forced a U-turn from the government this week, ensuring that children would receive meal vouches from schools during their off period.

Rashford can be seen in the picture below kneeling in support of the BLM movement. An iconic photo just minutes before the game!