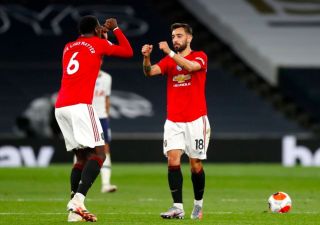 Paul Pogba was only given 34 minutes against Tottenham Hotspur on Manchester United’s Premier League return – but his impact was profound.

Much has been spoken about the midfield link-up between Pogba and Bruno Fernandes, but manager Ole Gunnar Solskjaer decided to hold off on starting the pair together, instead choosing the more familiar double pivot of Fred and Scott McTominay.

Throughout the opening hour, United were lacking a player of Pogba’s ingenuity and imagination breaking down a resolute and typically organised Jose Mourinho defence.

United fell behind in the first-half after Steven Bergwijn was allowed to stroll through the defence and fire home.

And it wasn’t until the divisive Frenchman was introduced alongside Mason Greenwood that we really saw United’s attack unleashed.

While chasing the game against a compact and pragmatic Tottenham set-up, Fernandes and Pogba showed glimpses of what is to come with intricate link-up in tight areas.

Pogba won United’s crucial penalty with a fantastic piece of skill in the box forcing a foul from Eric Dier, which Fernandes converted confidently. Just minutes later, with United looking for a winner, he played an awesome 40-yard ball that was inches from finding the feet of Marcus Rashford through on goal.

Perhaps Solskjaer will now live to rue not starting Pogba from the off as the Reds looked far more offensively dangerous with the 27-year-old as the midfield fulcrum.

Surely Fernandes and Pogba will now get their chance to blossom as a midfield pairing in the next league game at home to Sheffield United on Wednesday.

See his stats from Pogba’s cameo below, courtesy of Statman Dave:

READ MORE: Video: José Mourinho says something to Bruno Fernandes before chuckling to himself