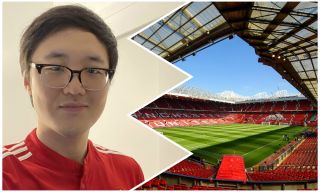 Welcome back to the latest feature of ‘My Love for United’, I hope you are enjoying this feature.

This week’s comes from someone, if you watch a lot of United content online, you may well be familiar with. John Shin has featured on the likes of Full Time Devils and Stretford Paddock and I have found he always has interesting opinions on United, which contributes to entertaining viewing, and he has a great story lined up.

So, without further ado, this is John Shin’s love for United, enjoy!

Tell us a bit about yourself.

“My name is John Shin, 27 years old, a Korean American born in Seoul, South Korea. Immigrated to NY sometime in primary school. I’m currently studying to be a lawyer, but as with all things in life, that too – can change course.”

When did you start supporting United?

“I followed world football on a scattered basis since the 2002 World Cup (held in South Korea/Japan). I’d watch games on the off-chance that it was on television, but I’d say that my love for Manchester United started with Ji-Sung Park’s arrival at Old Trafford. Normally, neutral, non-UK based fans (especially in Asia) would support the “player” as opposed to the “club”. However, I found myself falling deeper and deeper into the rich, complex history of the club, slowly immersing myself into the traditional values that Manchester United so strongly boasted as not only a footballing organisation, but as a global community. Even after Ji-Sung Park’s eventual departure, I realised that I’d already become a, full, devoted Red.”

“Nope. They support me supporting United now, though! They watch games with me and are happy when I’m happy.”

“Ji-Sung Park would be my cult-hero, the role model that I looked up to as a hometown legend, but my favourite United player would have to be Paul Scholes. I always wanted to play as a midfielder, and there was none like Scholesy – spraying pinpoint 40-yard passes like it was a joke to him, smashing volleys, insane tackles… My absolute favourite.”

“It’s a split between David de Gea and Paul Pogba (sorry, I can’t pick one haha!)

“David de Gea is a hero. Joining the club as a young Spaniard from Atletico Madrid, he ascended through the ranks and pushed hard to become a in-my-view club legend. People overlook his contributions because of his lack of medals in comparison to other “winners” of the past(he’s still got quite a few, too), but I think that we’ll look back on his career and deem him one of the most important goalkeepers in our history. He saved this club from absolute embarrassment on SO many levels during our early stages of the notoriously-phrased “transition period”. Manchester United’s history post-SAF would be extremely different had it not been for David de Gea, in my personal opinion. He saved us from an inordinate amount of shame during the Moyes/LvG/Even Mourinho days at times.

“I love Paul Pogba, and will continue to support him as I have always done. He’s got an infectious positive energy about him, something that I resonate with on a personal level. I think the current dilemma he’s found himself in with the supporters could have been avoided had he kept his entourage in check, and been more expressive and vocal about his current situation. However, I think that’s all trash – these players are not stupid. They know what they’re doing AND NOT doing, and I know that Pogba believes it in him to prove his doubters wrong on the pitch once again once he’s able to fully recover from his injury.”

Most hated rival and opposition player of all time?

“I don’t have much hatred in me to “hate” a rival or opposition, but man I wish someone could tell these “aggressively irrational” Manchester City fans to relax. Don’t get me wrong – I have the utmost respect for their quality of football and their manager, and their club has been relatively successful for the most part (apart from their shady dealings that got them into trouble recently, haha!)

“However, I notice so many Man City “fans” who like to throw around the word “history” and “tradition” in front of supporters of clubs like Manchester United, Liverpool, etc. It’s your right to support whoever, and I love that you support them, but don’t lie..

“Man City has history and tradition as any existing entities do, but some of these “irrational” fans need to stop themselves and face the facts: Manchester City is relevant NOW. Their “history” of success does not exist on the same plane as clubs like United and Liverpool have. That’s all I have to say, other than that I’m cool with all.”

“I know, I know… “John is Korean and he’s biased”. I’m not going to lie and tell you that I’m not biased, but I truly believe that he’s quality. I wanted United to sign him back when he was in Hamburg, and when he moved to Leverkusen I thought we should pounce at the chance. We also don’t really need offensive additions to our current squad (I’d like Sancho in this current situation), but if I could be dreaming and completely biased I’d take Sonny all day. He’s got an eye for goal, can play on any side and has one hell of a weak-foot.”

“The game isn’t in the same calibre as Ole’s goal in 1999 or Ronnie crying on the raining pitch in Moscow of 2008, but the above-mentioned game sits close to my heart. I was in college, hating life, and decided to skip class to watch the game alone in my dorms.

“When Park scored, I screamed at the top of my lungs, smashed my desk, banged on the counters so loud that my suite-mates, RAs all came in and asked me to calm down. What a moment that was. I’ll never forget it.”

Are you Glazers in or out?

“This question is the most bizarre enigma. In an ideal world where there was another rich, ethically sound ownership available to purchase Manchester United, I’d have them out in a heartbeat. But in reality, that’s difficult, and there’s nothing that suggests we’d find even better.

“Conclusion: Glazers OUT, but we as fans need to keep laying on the pressure to correct their mistakes.”

“It’s still too early to judge, but I was one of the supporters who felt that Jose wasn’t properly backed given the absolute sham between Ed Woodward, the board and the manager,  eventually leading to his unjustly termination. I pleaded after the Jose debacle that the same chaos should NOT happen to our next manager. I’m not 100% sold on Ole yet, but I believe wholeheartedly that he’s my manager that I’ll back to the end, and I’d like to see him fully backed financially and everything management related for the next few years to see where he takes us. He deserves that.”