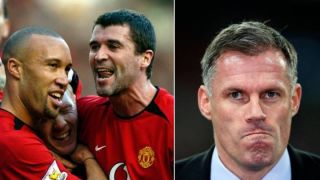 Mikael Silvestre’s brilliant dig at Jamie Carragher deserves looking at because it’s something I’m sure many footballers were thinking on Wednesday night during his commentary of Manchester City’s win over Arsenal.

Firstly, we’ll take a quick look back at what happened last year when, in a moment of madness, Carragher spat out the window of a moving card towards a Manchester United fan and his teenager daughter.

Carra said on Wednesday night that Arsenal centre-back David Luiz may never play in England again after his shocking display against City.

Silvestre, who spent nine years at Old Trafford and also played for Arsenal later in his career, took issue with Carra’s comments, replying: ‘We all thought the same after he spat at football fans but he is back, spitting at football players. #JamieCarramity.’

We all thought the same after he spat at football fans but he is back … spiting at football players ! 👏🏼👏🏼👏🏼 #jamiecarramity https://t.co/UtShJyKjCO

Carra has not responded to the former United defender, despite being active on social media since it was posted, and the tweet was liked by current Liverpool man Dejan Lovren.

Credit to the guy.

He always manages to find a new way of pissing off his own club’s fans 😂😂😂 pic.twitter.com/ZnmYU9hjfn

Liverpool player or not, Lovren is right to side with Silvestre on this. How can he talk about a player not being accepted in English football again after his conduct over the past year?

It was a stupid comment and I’m sure he regrets it — even if Luiz was awful against City and at fault for two of their goals.