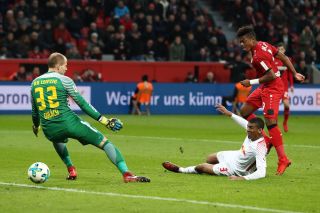 Manchester United are hoping to secure the services of a winger this summer to add to their front line. In an attempt to prioritise an alternative option to number one target Jadon Sancho, bosses attentions could turn to Bayer Leverkusen winger Leon Bailey.

Bailey, 22, has been identified as a direct alternative to Sancho and can be secured for less.

The Jamaica winger displays many similar attributes to Sancho. He is direct, quick and always looks to provide service into the box.

It is now believed, according to TalkSport, that Bayer Leverkusen have slapped a £40m price tag on the winger in an attempt to prompt United to make a decision.

Should United fail in their pursuit of secondary target, Aston Villa’s Jack Grealish, the low cost option of Bailey may wet the appetite of  Chief Executive Ed Woodward.

In recent times, Bailey has been linked with the likes of Chelsea and Manchester City who both opted against making a formal approach for the winger.