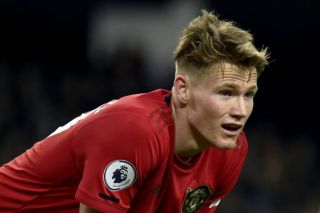 Manchester United players have been unimpressed with the performance of referee Jon Moss in the first-half of their Premier League return against Tottenham.

Ole Gunnar Solskjaer’s side trail Spurs 1-0 at the break, after struggling to find any fluency in their play.

Dutch forward Steven Bergwijn scored the opening goal of the game, blasting a shot past David De Gea after being offered far too much space from United defenders.

De Gea and Maguire should both take responsibility for United going behind. Maguire was initially strolled past with ease, and our Spanish number one can have no excuses about not keeping out Bergwijn’s effort.

What has been noticeable about watching the game with no fans is that everything that is being said by the players can be heard.

Journalists lucky enough to be in the press box this evening, Charlotte Dunker and Samuel Luckhurst, have heard Harry Maguire and Scott McTominay voice their anger towards Moss at a number of decisions.

Daniel James was handed the first yellow card of the game, despite Spurs midfielder Erik Lamela somehow avoiding the book for a nasty late challenge early on.

See what they had to say to Moss below:

Maguire asking the fourth official if the ref is taking the piss as Daniel James is shown the first yellow card of the game.

McTominay again, after Fernandes goes down: 'Are you f*****g watching it?' #mufc