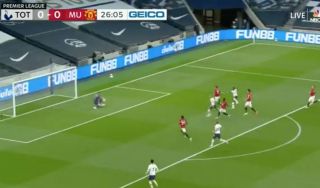 Manchester United are back in action against Tottenham Hotspur in their first game since the sport was brought to a halt over the coronavirus pandemic.

It has taken just 27-minutes for the deadlock to be broken with Spurs forward Steven Bergwijn opening the scoring for Jose Mourinho’s side.

The goal came from a Hugo Lloris goal-kick which was fumbled into the path of the on-rushing forward. At first glance it appeared the dutch attacker may be offside, however, upon closer inspection, United right-back Aaron Wan-Bisska played everybody onside.

Bergwijn still had a lot to do when faced with United number one, David de Gea, but his shot proved too powerful and ended up in the back of the net.

United fans have since taken to Twitter to express their disappointment in the Spanish keeper, believing he should have done more to keep the scoreline 0-0.

Some have even called for Dean Henderson, who is still on loan at Sheffield United…

It’s nice to know that after everything that has happened in this world somethings never change. Like de Gea. Being a keeper. And being awful at it.

De gea what a silly amigo

Paging Dean Henderson ….. Mr. Henderson, we are ready for you

READ MORE: Photo: Rashford takes to knee in support of BLM movement before kick-off against Tottengam