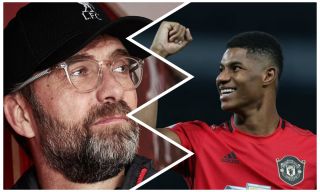 The German coach admitted that he couldn’t respect Rashford’s work for a wonderful cause any more, with the England international putting up an ‘incredible’ fight for the underprivileged who live in the UK.

Rashford’s work has led to the Government performing a U-turn to pledge an extra £120m to ensure that no children go hungry during this difficult time for families across England.

As someone who relied on food banks as a child living in Manchester, Rashford saw the injustice and used his platform to speak out.

Of course, rivals should be put aside in cases like this and it’s not difficult for anyone to see that Rashford is a wonderful human being. Liverpool’s Twitter account praised the United forward just a couple of days ago too.

See Klopp’s quote on Rashford below, as per Melissa Reddy of The Independent:

Jürgen Klopp: "I'm proud of the players, but not surprised they've helped during a difficult time because they do a lot of things without talking about it. What Marcus Rashford has done – I couldn't respect it more. It's a shame he had to do it, but it was incredible."

Hopefully more footballers can join in and do more things like this. The positive way in which Rashford used his voice against the Government should inspire others!

Marcus Rashford – Leader of The Opposition!