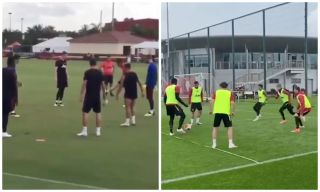 Manchester United’s first competitive match back is fast approaching with the Reds preparing to face-off against Tottenham Hotspur on Friday.

Ole Gunner Solskjaer and his side will travel to London on Friday to take-on fellow top four hopefuls Tottenham Hotspur.

United have been the stand-out performers during the league’s COVID-19 hiatus with the club’s players and staff going above and beyond to do their bit during these uncertain times.

However, on the pitch, United’s post COVID-19 performances are yet to be seen. Equally, Spurs, now under the guidance of ex-United boss, Jose Mourinho will also be looking to restart the league on the front foot.

The United squad have looked in great shape since training resumed earlier last month and many squad players have spoken about the overall eagerness to get back to business.

These early encouraging signs have prompted eagle-eyed fans to spot a key difference between life under ex-gaffer Mourinho and current boss Solskjaer.

Fans have noted that the squad have improved ten-fold during a particular training routine; the Rondo.

They were quick to compared the routine under the two bosses and it has since been doing the rounds on social media.

Let us know your thoughts, will Solskjaer’s revitalised Rondo training help lead United to a Rondo-zvous with the illustrious Champions League?