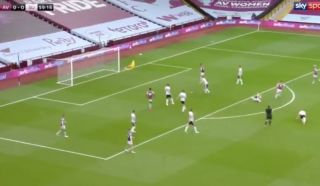 On-loan United Goalkeeper Dean Henderson made a stunning save in tonight’s early kick-off between Aston Villa and Sheffield United.

Henderson, 23, has recently had his loan move with Sheffield United extended to the end of this season.

The young keeper started in tonight’s first game back since the Premier League was suspended due to the COVID-19 pandemic.

Underwhelming, the game between the two sides at opposite ends of the table ended in a 0-0 draw.

However, after The Blades had what appeared to be a goal go unrecognised by Goal Line Technology late on in the first half, had it not have been for Henderson’s super-save Villa could well have taken all three points.

What a save Dean Henderson! 🧤pic.twitter.com/n4ebDKWkKY