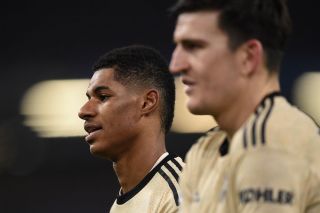 Football is back and so are Manchester United! As for me, I’m still here, writing about both – you can’t get rid of me that easily!

It may not be football as we know it, with the newly sterilised environment behind closed doors, no handshakes, staggered tunnel walks and five substitutions, but beggars can’t be choosers.

Three months on from the demolition derby, United – the country’s in-form team until the COVID-19 enforced lockdown – make a first ever visit to Spurs new stadium and renew hostilities with Mr. Mourinho.

On the week that Euro 2020 should have begun, instead the Premier League is set for Project Restart. This does not feel like a continuation of the season, it almost has the vibe of the start of a new one. In an ideal world, White Hart Lane 2.0 would be a sell out, a bubbling cauldron of atmosphere and excitement on United’s maiden voyage to England’s second biggest club ground – only our very own Old Trafford is larger in terms of capacity.

Instead, it’s a step into the unknown in more ways than one with only 300 people (standard home matchday for Man City then), including the players and both managers, to be permitted inside and social distancing measures maintained at all times. Players must travel separately, there will be no ball boys, players cannot surround the referee and won’t be allowed to spit or clear their noses. All non-playing staff must wear face coverings, hand sanitisers will be in use and post-match interviews will be done on the side of the pitch (with all press conferences taking place via video link).

I can’t say I’m jumping for joy at this strange ‘new normal’ version of the beautiful game, but we’ve gone so long without any semblance of live sport that I’d watch a tiddlywinks championships at the moment, if indeed that’s even a thing.

Had United faced Spurs when originally scheduled, six days after the win over City, almost everyone would have predicted a United win. Not only had Ole Gunnar Solskjaer’s men put together an eleven-match unbeaten run, but his Old Trafford predecessor had come under heavy pressure, residing over a six match winless streak. Mourinho’s men went down on penalties to Norwich in the FA Cup whilst, in mitigation, being without their two key men in Harry Kane and Son Heung-min. Now however, the north London club’s go to match winners are fit and firing again with the heavy burden of dragging the team back into top four contention sitting largely on the shoulders of the England captain and his South Korean cohort.

For United, Marcus Rashford was another whose season would have been curtailed if not for the lockdown. The England man has had a big week, and will be looking to secure another important victory as United’s top scorer returns to action. So too, does Paul Pogba, with all eyes on the World Cup winner (not for the first time). His link-up with Bruno Fernandes is a salivating prospect and will add a new dangerous dimension to Solskjaer’s attacking options. With the players not having the rhythm or momentum of three games a week, they will effectively be starting from scratch. United do not have any injury problems, but it will take a few weeks to return to the optimum level of fitness and match sharpness with nine games left, so don’t expect a full throttle encounter with the players thrown back into the hurly-burly of top level sport after months of garden workouts.

It’s been such a long time since we last played, let us remind you of the tale of the tape. United sit fifth, three points behind closest challengers Chelsea but with a slightly better goal difference. There are a cluster of clubs in the chasing pack, with Wolves, surprise package Sheffield United, Arsenal and Friday’s opponents Spurs all hot on our heels. Man City’s potential two-year ban from Europe could mean fifth would be enough to clinch that coveted Champions League place, but we don’t want to rely on that and, out of all of the sides around us, Solskjaer’s side have the most favourable run in. Indeed, our trip to White Hart Lane looks like our toughest remaining hurdle.

The Reds schedule is frantic and unforgiving, with the rest of the league games crammed into a five week schedule, with United also still in with a good chance of going all the way in both the Europa and FA Cups. Even in the absence of the Euros, fans will still get a summer festival of football – and the more Manchester United are involved, the better!

United have a good record against our rivals in and around the top of the table, but can we be expected to just pick up where we left off? Even in absentia, the Reds have kept me occupied during the lockdown but there’s only so many times you can watch the Class of 92 or the 08′ Champions League final. Kane and Son may be back for Spurs, but so are United and we can’t wait.

However, here are some predictions from Stretty News followers via Twitter: