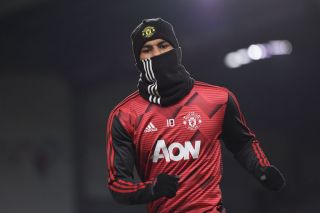 The Premier League saw it’s long-awaited return yesterday with two games featuring Aston Villa, Sheffield United, Manchester City and Arsenal, however, fans of the red half of Manchester have a little longer to wait before they see their side back in action.

Manchester United will travel south to the country’s capital on Friday where they will take on Jose Mourinho’s Tottenham Hotspur.

The first matches back are going to be notoriously tough to predict due to so many variables such as no crowd present, increased substitutions and uncertainty around player’s match fitness.

However, in a resilient attempt not to be deterred by the league’s unpredictable nature, I will do my best to breakdown how the 90 minutes could unfold.

Marcus Rashford and Paul Pogba are both seemingly back from their respective long-term injuries. But will they both start?

I think it is fair to assume Rashford’s place on the left-wing is more or less nailed on, aside from his recent off-field heroics, the young forward has put in some impressive cameos on the training field and does appear to be in peak physical condition.

Pogba, however, may well be monitored slightly closer by manager Ole Gunner Solskjaer having recently completed his rehabilitation from a reoccurring ankle injury.

I would expect to see the Frenchman at some point on Friday, but I won’t be getting my hopes up that he will be in the squad’s starting line-up.

Elsewhere, Solskjaer faces a selection dilemma at the heart of United’s midfield as well deciding who is going to lead the Red’s line.

With fan favourite Bruno Fernandes set to start, Solskjaer will need to decide who is going to join the Portuguese attacker in the middle of the pitch. Likely candidates include Fred, Nemanja Matic and Scott McTominay.

McTominay’s last outing saw him score a superb solo effort from 40 yards against rivals, City. (Yes, that game was this season believe it or not).

In addition to this, Brazillian Fred has undoubtedly been one of United’s best players throughout the season, thus far. Matic has also enjoyed prolonged periods of consistency once called up.

Should the United coaching staff fancy their chances against a highly unpredictable Spurs side, it would be fair to assume they’ll go with a midfield of Matic, Fred and Fernandes. However, should they opt to play more conservatively and look to rival Spurs’ physical stature, we could well see McTominay come in for Fred.