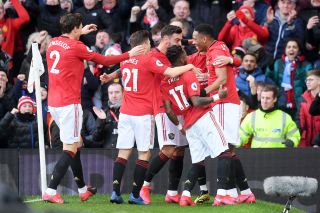 Manchester United left-back Luke Shaw has spoken out and identified that a key partnership between Bruno Fernandes and Anthony Martial could inspire the “unbelievable” Frenchman to produce even more.

Prior to the sport’s suspension, the French number nine was in fine form, scoring four in his last six outings. Without a doubt, Martial was enduring one of his best career spells to date and had been tipped by manager Ole Gunner Solskjaer to finish the season with 20 goals to his name, as per The Guardian.

Shaw, 24, has now spoken out and believes Fernandes’ arrival in January has contributed to Martial’s fine form with an obvious chemistry brewing among the pair.

The Englishman believes that the relationship between the two both on and off the pitch has been a key component in what is a flourishing partnership. The two attackers have combined well, most notably from a free-kick against arch-rivals City which led to the first of United’s two goals in their last domestic game since March.

During a recent interview with ManUtd.com, the left-back noted that Martial could go on to become one of football’s best strikers: “He’s got unbelievable talent and quality; he’s alongside Rashy in the sense that they can go all the way to being two of the best players in their positions.”

“He’s scored a lot of goals this season, [and] been involved in quite a lot, so he’s clearly in a very confident way.

“It helps a lot now that his partnership with Bruno has been flowing. They’ve been getting on really well off the pitch and that’s showing in how they play together on the pitch.

“They’ve been very creative. Of course, Anthony has had a really good season, but from what I see in training there’s still so much more to come from him, which is great for us as a club.”