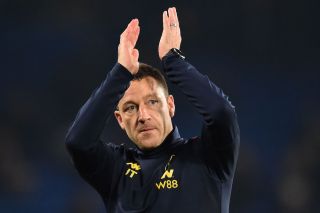 John Terry is best remembered by Manchester United fans for his famous slip in the Champions League final shoot-out in Moscow in 2008.

The Reds sealed their third European cup that evening at the expense of the crestfallen England centre-back.

But Terry’s career path could have been much different if he listened to his father rather than going off his own instincts.

He was at West Ham up until the age of 14 but was given the chance to sign for Chelsea, United or Arsenal after impressing scouts at youth level.

The Blues legend has revealed he was urged at the time by his father to sign for United, who reacted angrily when he signed his first youth contract at Stamford Bridge.

“Again, my dad never wanted me to sign for Chelsea,” Terry told the Footballer’s Guide to Football podcast.

“Actually, on the pitch of me signing my schoolboy form at the club, my dad refused to go on the pitch with me.

“I’m in the tunnel, the players are coming off the pitch and I’m waiting in the tunnel, Glenn Hoddle goes past and my dad’s going, “You’re not signing for this football club, we should sign for Man United.”

“And you needed a parent, so my mum said she would come and sign it with me, my dad’s going mad at my mum, “No you wont”.

‘There’s a picture of my mum and Graham Rix signing my contract, but my dad refused and absolutely kicked off that night.

“Again, me being the character I was, I knew Chelsea was right for me. One night that was probably supposed to be one of the best nights of my life turned out to be a tough one for a young 14-year-old to be honest.

“I just knew and loved Chelsea from the moment I walked in and never looked back, I still love the club and look out for every result now and it’s great to see [Frank] Lamps and Jody [Morris] in there now doing their thing, excellent.”

After moving to Chelsea as a youth player in 1995, Terry went on to spend 22 years in West London, establishing himself in the club’s folklore with over 700 appearances.

United, however, did not exactly miss not having Terry amongst their ranks throughout Sir Alex Ferguson’s period of dominance throughout the late 90’s and 2000’s.

England’s defensive pairing of Terry and United great Rio Ferdinand is unlikely to be matched for years to come.

Terry is now Dean Smith’s assistant at Aston Villa and will be looking to plot a survival bid ahead of their Premier League return against Sheffield United on Wednesday evening.