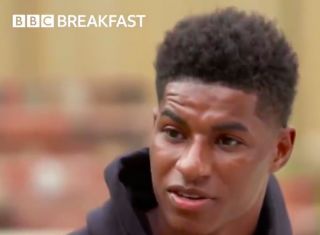 Marcus Rashford has revealed he spoke with Prime Minister Boris Johnson on a phone call shortly after the government U-turned their decision on free meal vouchers.

Johnson thanked Rashford for campaigning diligently and using his platform to raise awareness about the issue that holds great importance to the Manchester United forward.

The Conservative government had previously dismissed pleas to allow vulnerable children access to the vouchers over the school holidays.

But they have now changed their mind and pledged £120m in a ‘COVID summer fund’ which will provide food vouchers during the six-week holiday period.

The scheme will extend the £15-per-week supermarket vouchers currently given to some families whose children cannot attend school because of coronavirus.

As well as mentioning his discussion with the Prime Minister, Rashford spoke candidly about his desire to continue supporting the most vulnerable across the UK and revealed how happy his mother was after the government’s U-turn.

Stretty News would like to thank Marcus for all of his efforts in recent weeks.

Listen to his interview in full below, courtesy of BBC Breakfast:

EXCLUSIVE: @MarcusRashford speaks to #BBCBreakfast as the government changed their policy on free school meals.
He says he wants to continue to push for support for families.
More here: https://t.co/o0QSvANowX pic.twitter.com/ETGXtfukkO