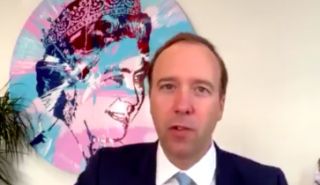 Marcus Rashford is one of the most talked about people in the country right now, but that didn’t stop Health Secretary Matt Hancock getting his name wrong live on air.

Rashford has captured the hearts of the nation after campaigning diligently for the scheme which helps avoid children going hungry  to be extended through the summer.

And after initially rejecting Rashford’s plea, Prime Minister Boris Johnson finally changed his mind meaning up to 1.3 million children who can’t attend school due to coronavirus will qualify for meal vouchers.

It’s been a monumental effort from Rashford and the football world has reunited to thank him for his efforts in his campaign that included an open letter to MP’s emphasising the seriousness on the issue.

Therefore, it is poor that Hancock managed to call him ‘Daniel’ when detailing the youngster’s conversation with Boris Johnson and thanking him.

Rashford took the blunder lightly with a brilliant response, suggesting he’d been called much worse recently.