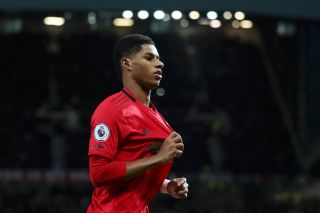 Rashford has deservedly received national plaudits for his diligent campaign to help the most vulnerable children across the country, which included a heartfelt letter to MP’s encouraging them to reconsider their stance.

On Tuesday, the government announced they would be pledging £120m into a one-off ‘Covid summer fund’ which will extend the period children can access the vouchers through the six-week summer holiday period.

The £15 per-week supermarket vouchers will continue to be given to parents of children who cannot attend school due to the coronavirus.

It is believed the change in government decision could help up to 1.3 million of the poorest children across the UK.

Speaking in an interview with Jim White on TalkSPORT on Wednesday morning, Fernandes described Rashford as ‘amazing’ for the way he has used his platform to shine a spotlight on the issue.

Fernandes is yet to play alongside Rashford at United but the pair are likely to start together as Ole Gunnar Solskjaer’s side resume their Premier League season against Tottenham on Friday evening.

Listen to the Portuguese playmaker below, courtesy of TalkSPORT:

💪 “What he has done for the country is amazing. He’s respect for what he did.”@B_Fernandes8 hails @MarcusRashford for his work on free school meals. 🥘

Huge respect for this 🤝 pic.twitter.com/T1RegqBXv1