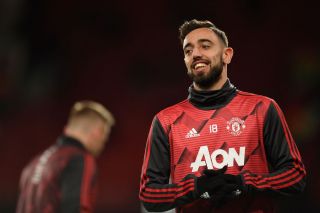 Bruno Fernandes is relishing the prospect of lining up alongside Paul Pogba at Manchester United.

The Portuguese playmaker has not yet played with Pogba, who was nursing an ankle injury when he made his immediate impact after the January transfer from Sporting Lisbon.

But Pogba has used the enforced break to regain full fitness and is now raring to go ahead of crucial nine remaining Premier League games for Ole Gunnar Solskjaer’s side.

Much has been spoken about how the partnership between the pair will fare, but it’s a nice dilemma for Solskjaer to have ahead of Friday’s resumption away to Tottenham Hotspur.

We expect Fernandes to play in the number 10 position for the majority of United’s remaining games, with Pogba playing a more withdrawn role in a midfield double pivot in Solskjaer’s preferred 4-2-3-1 system.

Anyhow, Fernandes has said in an interview with TalkSPORT on Wednesday morning that he cannot wait to play alongside the World Cup winner in the next few weeks, describing him as ‘one of the best players’.

If Solskjaer can get the partnership between Fernandes and Pogba to flourish, United will be a serious attacking force in the final few games of the season.

Listen to a snippet from Fernandes’ interview with Jim White below, courtesy of TalkSPORT:

“Everyone wants to play with the best players – and Paul is one of them!” ⭐️

“It’s exciting to see him play again. For me to play alongside him, it’s amazing.”

Bruno Fernandes tells talkSPORT he is excited about playing with @PaulPogba.

How excited are you #MUFC fans? 🔥 pic.twitter.com/Ome47cnFgO