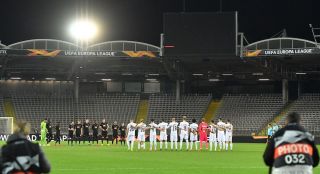 According to UEFA’s official website, the Europa League final which may feature Manchester United will be played in Cologne on August 21.

However, destinations for the quarter-finals and semi-finals (single-leg fixtures) include Cologne, Duisburg, Dusseldorf and Gelsenkirchen.

UEFA say they will consider allowing some fans at games in August which we can only imagine is down to how far the world is in its ongoing battle with the coronavirus pandemic.

As things stand for the Red Devils, United are in the Round of 16 after playing their first leg away to LASK, where Ole Gunnar Solskjaer’s side managed a comfortable 5-0 win to put one foot into the quarters. A decision has yet to be made on whether the round of 16 second leg will take place at Old Trafford or in Germany.

Clubs can register three additional players to compete but not new signings.

Each team is permitted to make up to five substitutions per match.

United stand a very good chance at lifting a trophy this season — whether it’s the Europa League or FA Cup — and there’s still a fight for top four to look forward to.

It would be great to see Solskjaer win silverware in his first full season in charge.