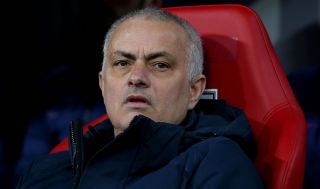 Hello and welcome back to Rowlesy’s Ramblings. Just 1 day now until United resume their quest to make the Champions League next season, as they will head to The Tottenham Hotspur stadium for the first time. In typical fashion, the focus pre-game has been on Jose Mourinho and it would be remiss of me not to delve straight into his games.

I came across an intriguing article in The Athletic this weekend where Daniel Taylor made the stunning revelation that Mourinho has privately said that he feels his successor at United Ole Gunnar Solskjaer is out of his depth.

The audacity is utterly ludicrous on a few levels. Firstly, isn’t that the pot calling the kettle black? After trophies came in his first season and we got that initial bounce, Mourinho was the very antithesis of a Manchester United manager: Antagonising the board and fans. The negative, functional tactics. The public absolving himself of any blame. The very public fallouts with Paul Pogba, Anthony Martial and bullying of Luke Shaw. Playing Scott McTominay at centre-back to make the point his hands were tied. The endorsing of the absurd signing of Alexis Sanchez which dogs United to this very day.

Now, tell me again Jose how you have come to this wild conclusion that Solskjaer is out of his depth when there is probably the most optimism felt at United in the post-Ferguson era happening in the present moment and it has happened through Solskjaer diligently starting to repair the wreckage you sanctimoniously left behind?

This has to be one of the biggest cases of sour grapes in recent footballing memory. I do agree Mourinho was let down at the start of that third season. Finishing second to that City team was no disgrace, but then to ‘kick on’ with Fred, who was always going to need time adapting from the Ukrainian league, an unknown prospect Diogo Dalot and Lee Grant? Fair play, Jose, you were not backed adequately. Harry Maguire was wanted and we paid exceedingly more the summer later.

From the board’s level though, Mourinho’s transfer record was mixed and had already splurged so much money, would you have trusted him to recruit well when he was relying on the likes of Matic, Fellaini, Lukaku, Sanchez? You can see he had a preferred type of player. Where would Rashford, Martial and a rejuvenated Luke Shaw be today if a washed up, dated, bitter Mourinho was still here?

Ole has already shown his credentials in the crunch matches and recorded big victories, including over Mourinho at Old Trafford when the pressure was threatening to overflow the tank. When we lost to Burnley at home, his position was precarious at best. Those days appear long gone.

Solskjaer, if not spectacularly, is quietly going about his business and he and his coaching team are evolving. The key will be finding ways to realise this squad’s optimal potential and gaining much more consistency.

Even if Jose does a job on United on Friday with his functionality if will not change the truth that he deserved to lose his job at United and he is still bitter at that.

Everyone is wondering whether Pogba and Bruno will work together, but what an amazing headache to have

Of course, a midfield comprising the two world stars losing to West Brom was always going to make a cracking headline. Tottenham lost to Norwich, Arsenal to Brentford, Leicester to Aston Villa, these warm ups mean nothing other than miles in the legs.

It is the million dollar question, how will United set up with Pogba and Bruno? Finally, United have gotten to a stage where they can ask this question. This is how you improve as a team by adding star studded quality who can walk into the team. Once United progress to having the likes of Fred and McTominay as squad players, you know we will be onto a much stronger proposition. After all, the prospect of being one injury away from Lingard and Pereira again is stomach churning.

Tactically speaking, it will be fascinating to see where Ole goes against Spurs. Will he revert to his trusted back 5, have Pogba and Bruno as two of the three midfielders and a front two of Rashford and Martial?

The counter argument is how can you drop Fred or Matic, who were exceptional just because of a pandemic and Pogba is now fit? Call it left field, but I can envisage Pogba starting on the bench but it is a wonderful ‘problem’ for Solskjaer to have.

United potentially have 16 games to fulfil before the season’s end and rotation will be paramount so I think you will see varied tactics depending on the opposition and scheduling.

All that said, the prospect of Bruno and Pogba together certainly whets the appetite.

The Phil Jones story has gone from comedy to sadness

It emerged, following the WBA games, that Phil Jones had got injured for the umpteenth time in his career, one which held so much promise. The ‘water is wet’ accompanying lines hold very little comedic value now, though.

The decision to hand him a new contract until 2023 was bemusing, given how little he has featured. Since then, he has looked embarrassingly short of the United standards in Belgrade and Sheffield.

His days should be numbered, but I wonder how much interest there will be in an injury prone 28 year old and Jones could theoretically force United to sit on the contract they erroneously gave to him.

It is a sad story from rising to prominence dominating a peak Didier Drogba for Blackburn, man marking Neymar in the Maracana to outwardly accepting a testimonial at United would be fruitless due to lack of interest.

Who knows what Phil Jones could have become at United, the next Duncan Edwards though? Fergie, like us all, must cringe at those fateful words.