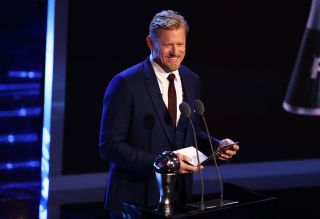 Peter Schmeichel is excited to see Paul Pogba back for Manchester United ahead of the Premier League restart this week.

Pogba has spent the enforced break regaining full fitness, and is now raring to go ahead of a defining six-week period for the Reds.

It’s crucial that United qualify for the Champions League places this season and with a full complement of players to choose from, boss Ole Gunnar Solskjaer will have no excuses if they don’t push Chelsea and Leicester all the way for a top four finish.

Much of the conversation ahead of United’s highly anticipated return has been centred around Solskjaer’s midfield conundrum.

Pogba has not yet played alongside new signing Bruno Fernandes and it will be fascinating to see how the par will be utilised in the remaining nine league games.

Fernandes has been exceptional in the attacking midfield role since joining from Sporting Lisbon in January. His creativity and energy have made United much more of a dangerous offensive threat.

But Schmeichel believes Pogba may be better suited to the number 10 role, where he is not burdened by defensive responsibility.

“It’s very important that United pick up from where they left off and since the signing of Bruno Fernandes – who wasn’t there for that long before everything shutdown – he’s changed the way that United play,” he told the Metro.

“There’s been an opportunity to get everyone back, particularly with Pogba. I can see him in a more number 10 role which I think he’s more suited to.

“I think he’s better playing with less defensive responsibility and less responsibility in the build-up. We haven’t seen the combination of Bruno and Pogba yet in a competitive sense so it’s something to look forward to.

“His [Pogba’s] quality you can’t debate. He’s a quality player but everyone has been confused about his ideal position. When he’s come on and played further forward it suits him better.

“I know people focus on his long range passing and they look fantastic but I look at his football intelligence. His short passing, how he puts people in.

“Bruno is coming a little bit of the left. He’s the sort of guy that roams around. You could play both of them next to each other in a 4-3-3 system but it’s just great to have Pogba back. It’s been a very, very long time that he’s been out.”

The selection dilemma facing Solskjaer concerning Fernandes and Pogba is certainly a nice one to have.

United have two of the best creative players in the league at their disposal but must use them effectively to reap the rewards.

The Athletic report that Solskjaer is preparing a starting XI without Pogba for the opening game away to Tottenham on Friday evening before reintegrating him into the side fully.

The Frenchman may have to settle for a cameo role in his first game back, but will be determined to make an instant impact against the opposition managed by Jose Mourinho.