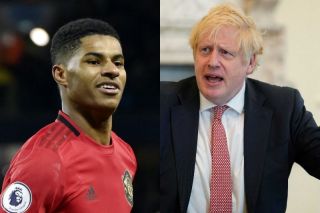 It started, as so many things do, with a tweet. A tweet posted seven days ago from the account of a 22-year-old Manchester United striker, a black man from an underprivileged background in suburban Wythenshawe. He also happens to be one of English football’s most exciting talents, but – when it comes to this extraordinary tale – that barely seems to matter. Well, then again, I suppose it does.

You see, footballers are renowned for NOT taking an interest in politics, equality, racism, poverty and just about any other-wordly aspect you can think of. Footballers notoriously live in a bubble in which the only thing that matters is their 90-minute working life two or three days a week. They don’t care about us, the people. Or so those from the outside looking in would have you believe.

That tweet simply read: “Who in the Government is responsible for the food voucher scheme.” Little did Marcus Rashford, or any of us, know that – a week on – this story would grow from an unknown quantity into the national headline-grabbing spotlight.

Rashford had already donated £20m of his own salary for FairShare UK, a charity that provides free food to children in struggling, impoverished, low income families. That’s before we even look at the fact he learned sign language to judge a poetry competition at a deaf school and set up a Christmas shoebox scheme to help the homeless in Manchester.

Rashford has always spoken candidly about his tough upbringing as one of five kids in a single parent family, with his own struggles against poverty inspiring him to take his biggest action yet. With the COVID-19 outbreak hitting hard in both health and pocket, Rashford’s emotional letter to MPs begged for the free school meal fund to be extended into the summer. Met only with a wall of silence, he continued to fight the cause. Tweeting: “We’re not beaten yet, MPs please #maketheUturn.” With 2.8 million followers on Twitter and his momentous campaign growing, the Government, kicking and screaming, caved in. That U turn was made. Manchester United’s  number ten showing number ten Downing Street how its done.

A humble footballer forcing an elected, established status quo into beating a hasty, tail between their legs retreat. Granted, the Government can’t and shouldn’t give money to everything, but the scheme will now provide free food for £1.3 million during the six week holidays.

2020 has not only proved to be Rashy’s best season in front of goal for United, but also a year when he came of age as an inspirational role model, showing a maturity, an intelligence and a level headedness beyond his tender years. Using his status in the public eye to push for social equality is a very rare thing for a Premier League player, especially one so young. United have done a lot right during this global pandemic and Rashford is just another shining example of our club’s community ethos.

Football has become irrevocably intertwined with political movement, and Rashford is one of the few footballers to stand up for what he believes in publicly. The haters will say it’s nothing more than an elaborate PR stunt, but there’s nothing to be gained from the PR surrounding these issues. He’s taken action because he wants to campaign for changing lives. Rashford may have come long way from the hard times of his childhood, but he’s never forgotten his roots. Rashford has carved out a career in the game we all love and just wants to give something back. That can only be applauded.

He will have earned so much respect and admiration, his mum and the club must be bursting with pride at the man he has become. He’s an absolute credit to the name Manchester United and I couldn’t be prouder that he plays for my club as one of our own. It’s been a pleasure to watch Rashford’s rags to riches rise from promising youngster to transcending the game.

There’s surely something inherently wrong in this country when a professional footballer, himself still only 22, has to tell our Prime Minister that children need to eat. He shouldn’t feel he has to do this at all but Rashford’s doing a great job. Boris Johnson and his Conservative cohorts could certainly take a leaf out of Rashford’s book as a grounded, articulate, empathic,  compassionate and generous man of the people. Such rare commodities for the modern day, mega rich, high profile sportsman. Rashford > Boris no doubt. Marcus for PM!

A role model already in the eyes of so many, honours and recognition far beyond the football field surely lie in wait for United’s future captain.