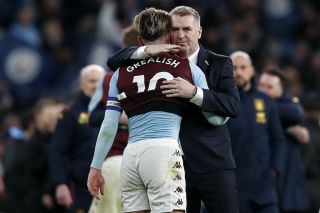 Ole Gunnar Solskjaer is thought to be targeting Grealish to bolster his midfield ahead of next season. The Villa midfielder has been excellent despite his side struggling in their fight for Premier League survival.

Grealish has caught the eye of many this season because of his form and you would think it’s only a matter of time before he gets his first international cap under England manager Gareth Southgate.

He’s been Villa’s best player and as a supporter of his childhood, he won’t like the idea of them being relegated before jumping ship though anyone in his position — wanting to do what’s best for his career — would take the jump.

Footballers dream of being successful and that’s less likely at Villa than at United.

While other names have been linked with a move to Old Trafford, it seems like Grealish is a name that won’t go away so our interest must be genuine.

A summer transfer had been tipped before the pandemic and the Daily Mail now claim Villa want £80m for their captain, with United leading the race for his signature.

Villa won’t be able to demand that much if they’re relegated, so I expect United (and other interested parties) to bide their time and see what happens when the Premier League campaign concludes.

The Villains are not showing signs of giving up on keeping Grealish for another season which will be difficult if they are relegated to the Championship. He has already helped them achieve promotion to the Premier League.

And did you know the Premier League returns today? Dean Smith’s side resume their relegation battle at 6pm against Sheffield United.