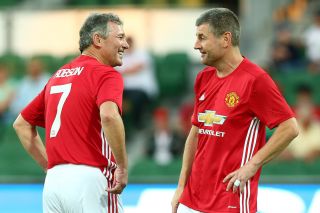 Manchester United legend and former full-back, Denis Irwin has given his verdict on his former side’s top four chances but has reiterated that for the remainder of the season, games are going to be even harder to predict.

Prior to the league’s COVID-19 induced suspension, United were in fine form and had managed to go 11-games unbeaten.

However, with the Premier League set to resume tomorrow when Aston Villa face Sheffield United, United will be looking ahead to their first competitive match in three months when they travel to Tottenham.

However, under the new Premier League measures and guidelines, there will be no fans present inside stadiums and this, among other factors, is a key component to the increasing unpredictability surrounding the resumption of the league.

During an exclusive interview with the official Manchester United website,  Irwin has offered his take on his former side’s chances as well as confirmed that games now have an added sense of unpredictability.

“It will be different,” Irwin admitted. “I don’t think there is any getting away from that. We’ve seen the Bundesliga get up and running and I’m really looking forward to the Premier League coming back and football in general, with the Championship returning around the same time.

“Obviously, it’s huge and the Premier League have done it the right way by taking little steps and making sure health is the most important thing.

“I’m really looking forward to it, as I think the whole country is, I really do.”

Irwin went onto add: “It is wall-to-wall football. On Wednesday, we’ve got a huge eye on things, even that first night, although we’re not playing ourselves. Sheffield United are away to Aston Villa and Arsenal are away to Manchester City.

“So, the position we are in, chasing Chelsea in fourth, means there are people behind us, like Sheffield United, who are having a great year as a whole, plus Arsenal and Spurs.

“There is an awful lot to keep an eye on but we’ve got to look after ourselves and the first game is huge on Friday night for us.”

Speaking about United’s first game back against Spurs, Irwin said: They don’t come much bigger than that. From their view point, they will feel they have to win if they are to try and compete for that Champions League spot and it was due to come at a time when we go back two-and-a-half months, when we were flying and Spurs were missing Harry Kane and a couple of others.

“I know we were missing [Paul] Pogba and [Marcus] Rashford but we would have gone into the game with loads of confidence. It’s different now, the first one in and you never quite know.

“It’s a big game for us, it really is. The selection is down to Ole isn’t it? The players have kept themselves fit all the time and been training for a few weeks. So, hopefully everyone is in the same boat. The match sharpness might not be there, but both teams have had friendlies.

“You look at that first week or so and there are some big games there. It would be great if we won and got up and running; it really would give us huge confidence.”

Irwin concluded by saying: “I don’t like saying this but, on paper, if we get over that you look at the next six or seven games favourably. But you know it’s not going to be like that. It’s going into the unknown again almost. It’s a big game and i’m just looking forward to football, in general, returning.”