The UK Government is warning fans that mass gathering to watch football’s big return will endanger the wider public.

As a result, this could put Project Restart at risk or see fixtures moved to neutral venues around the country.

The biggest fear is Liverpool fans won’t be able to help themselves after the league title is sealed — spoiling it for others in a shameful manner — but we shouldn’t go into the season’s restart paranoid without reason, giving anyone who gets a kick out of causing trouble the benefit of doubt…

Football resumes on Wednesday evening for the first time since March and sports minister Nigel Huddleston urged fans to stay home when games are taking place. In an interview with Sky Sports, Huddleston said: “The fans, we need them to follow passionately and follow from your home. Please do so responsibly.”

“The police have the powers to clear crowds and fine them, but those actions may mean we have to take a look at neutral venues or even other options.

“We still have COVID-19, this is not life as normal. I know the vast majority of football supporters will behave.

“We absolutely want to make sure that [fans turning up at stadia] is avoided, and individual fans and clubs and everybody knows they have a responsibility here.

“Those kinds of gatherings are not allowed and the police can intervene.”

It makes absolute sense that this would throw the game into jeopardy and fans must adhere to the rules.

And I believe United fans will behave appropriately in the race for top four. They will lead by example as the club has done during this pandemic.

The call for fans not to congregate outside stadiums is just common sense. Whatever people think of this UK Government or the way they’ve handled this coronavirus pandemic, people need to caution not only for themselves but those around them.

Congregation outside one of these games during a crisis is stupid. 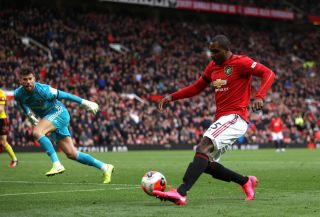