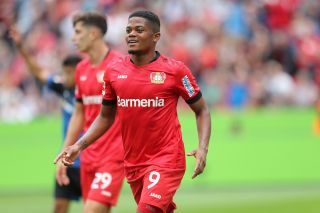 Manchester United have reportedly identified a Bayer Leverkusen star as a possible Jadon Sancho transfer alternative – but its not Kai Havertz.

Manchester Evening News have credited United with an interest in 21-year-old Havertz, who is one of the hottest prospects across Europe right now.

But according to the Daily Mail, manager Ole Gunnar Solskjaer is contemplating a move for the German international’s teammate Leon Bailey.

Bailey, 22, has scored 5 five goals and laid on two assists in nine Bundesliga starts this term, and is seen as a cost-effective option that could bolster United’s squad.

The Mail’s report claims United are less confident about the prospect of signing top target Jadon Sancho from Borussia Dortmund due to the financial impact of the coronavirus crisis.

Therefore Bailey, who is said to be valued at around £40m by Leverkusen, is an explosive forward that could be more attainable in the upcoming summer transfer window.

Left-footed Bailey is adept at playing off the right-flank, which is Solskjaer’s problem position as he continues to shape his rebuild.

The Jamaican international, like Sancho, is also versatile with experience playing anywhere across the front three with could suit him to United’s fluid attacking approach.

While Bailey has not gained the same superstar status as Sancho, he certainly has talent and United might have to be more realistic about who they can sign this summer.

Conversely, United may be better off waiting a year before making a move for their priority target in Sancho rather than signing a less desirable option that would not be a significant upgrade on what Solskjaer already has at his disposal.