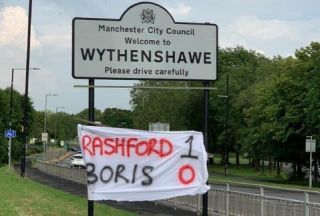 Marcus Rashford is a real hero and the people in the area of Manchester where he grew up understand that better than most.

The Manchester United striker, 22, persuaded the government to extend the free school meal vouchers scheme in England throughout the summer after he penned an open letter to MPs.

It was previously planned by the government to stop awarding vouchers during the summer because it’s usually a time children wouldn’t be in school.

That doesn’t mean those children don’t need to be fed. Quite the opposite, sadly.

For all his work towards helping the most vulnerable, someone has created a banner to hand in Wythenshawe which reads: “Rashford 1-0 Boris”

While it’s a blatant dig at Prime Minster, it’s remarkable that a 22-year-old Rashford who relied on food banks as a child in Manchester is showing up all of these politicians who are supposed to lead the UK in the right direction.